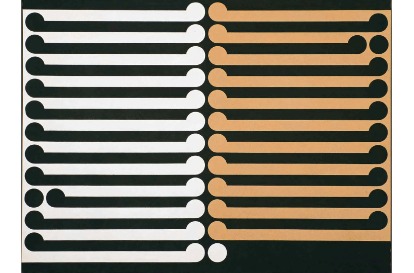 IN THE VALLEY: Eight Works from The Victoria University of Wellington Art Collection

Te Pātaka Toi Adam Art Gallery is pleased to present eight important works from the Victoria University of Wellington Art Collection. This small exhibition has been especially chosen for Whirinaki Whare Taonga as an opportunity for local audiences to see works by some of Aotearoa New Zealand’s leading artists first hand. The exhibition presents four works by leading artists of the modern period (1930–1970): Fred Graham, Ralph Hotere, Colin McCahon, and Gordon Walters, who are recognised for the ways they have responded to their surroundings and to their distinct but intertwined cultural inheritances, thus contributing to the evolution of modern art in ways that are uniquely of this place. These four artists are juxtaposed with four works by artists of newer generations, who have grown up alongside and after their forebears. Brett Graham, Robert Jahnke, Ava Seymour and Ronnie van Hout are familiar with their history and choose to build upon it, to add to the conversation about those self-same beliefs and values, but now with a critical intention to expand and complicate what has come before them.

IN THE VALLEY TALK AND TOUR

Join Adam Art Gallery Director Tina Barton as she shares insights into the work of 'In the Valley.'